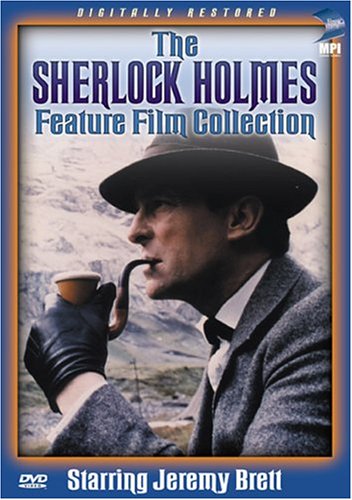 For many Sherlock Holmes fans, Jeremy Brett's definitive portrayal of the legendary sleuth was unerringly brilliant. This collection includes all the Holmes films from 1988-92 starring Jeremy Brett with Edward Hardwicke as the devoted Dr. Watson: The Sign of Four, The Hound of the Baskervilles, The Master Blackmailer, The Last Vampyre, The Eligible Bachelor. 9 hours on 5 DVDs.

In addition to numerous one-hour episodes, Granada Television produced five feature-length Sherlock Holmes films starring Jeremy Brett, easily the best of all screen actors to play the sleuth, and Edward Hardwicke, a warm and capable Dr. Watson. The 1987 feature version of The Sign of Four, the second Holmes novel written by Sir Arthur Conan Doyle, is faithful to the original story except in one important detail: Dr. Watson does not get the girl. Otherwise, the familiar tale of the death of Bartholomew Sholto and the theft of the Agra treasure is all here, as is a snappy performance by Brett as Holmes doing some of the finest investigative work of his career.

A thrilling blend of detective yarn and Gothic horror, The Hound of the Baskervilles (1988) concerns the apparent return of an old curse upon the Baskerville family in the terrifying form of a gigantic killer hound. Fans of Hardwicke get an opportunity to see his Watson on a solo mission for part of this story, though Brett is never far from the narrative. The supporting cast is very good, and the beast itself, revealed in a famously terrifying finale, is indeed a spooky revelation.

In The Master Blackmailer (1991), Holmes takes on the reputed king of all blackmailers. Charles Augustus Milverton (Robert Hardy) has made a fortune extorting money from the famous and the blue-blooded, and he routinely ruins others' lives when not pleased. Unable to talk Milverton into turning over letters belonging to Lady Eva Brackenwell, Holmes decides to steal them, going undercover as a plumber and even romancing Milverton's housemaid, Agatha (Sophie Thompson), to gain better access in the house. The story builds to a surprisingly violent finale, but the real hook is Brett's performance as the disguised detective and the startling suggestion that Holmes's close contact with Agatha truly moved the bachelor sleuth.

A little overextended as a two-hour movie, The Eligible Bachelor (1992) was made late in the enterprise. It finds Holmes (the ailing Brett, playing an increasingly darker and more neurotic detective) and Watson called upon to help in a case involving the disappearance of Henrietta Doran (Paris Jefferson). Fiancée of the noble Lord Robert St. Simon (Simon Williams), Doran was last seen with a former lover of St. Simon's, Flora Millar (Joanna McCallum). The unimaginative Scotland Yard instantly arrests Millar on suspicion of foul play, but it is Holmes who has to find the missing woman.

The Last Vampyre (1992) was perhaps the most ill-advised of the series. Entirely contrary to the tone and spirit of Doyle's short story "The Adventure of the Sussex Vampire"--which finds Holmes victoriously pitting his well-grounded deductive powers against irrational fears of a rise in bloodsucking--it's something of an embarrassment to the largely wonderful legacy of Granada's earlier efforts. (For the record, most of the creative executives who had worked on the beloved series in the 1980s had been replaced by the time this film was made.) In this version, Holmes does battle with a Dracula-like fellow who may or may not be the real McCoy. There is a great deal of padding to fill out the story, and it is mostly silly, but the ailing Brett gives an ever-fascinating performance, which deviates from Doyle's vision of the detective toward something darker and more personal. --Tom Keogh

A.J. Allmendinger, a part-time driver in the NASCAR Cup Series, ended up as the shocking winner of the chaotic inaugural race on the Indy Road Course.

Mercedes appears set to quit Formula E and is expected to officially communicate its exit decision in the coming days, Motorsport.com understands.

Spa-Francorchamps circuit director Nathalie Maillet has died aged 51, in what has been reported as a double murder-suicide.

The curbing in Turns 5/6 at Indianapolis came up, causing a bizarre incident with five laps remaining in the inaugural NASCAR Cup Series race on the IMS road course.

The JW Automotive Engineering team won twice at the Le Mans 24 Hours with ageing Fords and was considered the heavy favourite to add more victories to its tally after partnering with Porsche. But despite being armed with the all-conquering 917, this formidable combination was never as successful in real life as on the big screen.

Having twice missed out on Formula 1 and reinvented himself as a touring car driver, Jose Maria Lopez has had a rocky ride to becoming a four-time world champion. One more would put him level with his nation's favourite son, but there's another prize he would value far more than the honour of matching Juan Manuel Fangio's tally.

It’s fashionable among teams to knock the products offered by Formula 1’s sole tyre supplier, especially after the failures earlier in the season. But, as Pat Symonds explains, there are a number of unscientific myths behind these complaints against Pirelli.

McLaren Formula 1 driver Lando Norris believes his CEO Zak Brown and team boss Andreas Seidl have played a "hugely important' role is his development over the past two and a half years.

Glickenhaus topped the pre-event test day for next week's Le Mans 24 Hours after a late run from Olivier Pla put the #708 car ahead of both Toyotas.

Jake Dennis says a “weird sound” preceded the rear-axle lock-up that caused the rookie to crash out of the 2021 Berlin E-Prix while he was fighting for the championship title.

A bizarre inaugural NASCAR Cup race on the Indy Road Course ended with Denny Hamlin looking for his first win of the season and Chase Briscoe looking for the first of his career.

A.J. Allmendinger, a part-time driver in the NASCAR Cup Series, ended up as the shocking winner of the chaotic inaugural race on the Indy Road Course.

The curbing in Turns 5/6 at Indianapolis came up, causing a bizarre incident with five laps remaining in the inaugural NASCAR Cup Series race on the IMS road course.

Glickenhaus topped the official test day ahead of next week's Le Mans 24 Hours, with Olivier Pla outpacing both Toyotas in the #708-Pipo Hypercar. Here's a selection of images from the test.

Tom Ingram put in a beautifully judged drive from fourth on the grid to take victory in the reversed-grid finale to the British Touring Car Championship round at Knockhill.

Mitch Evans “hurts in every aspect emotionally” after his 2021 Berlin E-Prix startline glitch sparked a heavy shunt and eliminated him from the Formula E title race.

Yamaha’s Fabio Quartararo admits the wet latter stages of Sunday’s MotoGP Austrian Grand Prix were “the first time this year that I was thinking a little bit about the championship”.

Marquez had to take painkiller injections ahead of Austrian MotoGP

Honda’s Marc Marquez revealed he had to take some painkilling injections prior to the MotoGP Austrian Grand Prix owing to pain in his recovering right arm.

Ash Sutton won a thrilling battle with Colin Turkington in the second British Touring Car Championship race of the day at Knockhill.

Thierry Neuville has revealed Le Mans 24 Hours legend Jacky Ickx was sending him messages of support on his way to securing a drought-ending World Rally Championship victory in Belgium.

LB-16WKS1,Switch Push Button ON ON SPDT Round Button 3A 250VAC A
Video Inside
MotoGP MotoGP

Venturi’s Norman Nato won the final round of the 2020-21 Formula E World Championship at Berlin’s Tempelhof Airport, as Mercedes’ Nyck de Vries was crowned champion after the majority of his title rivals crashed out.

Spa-Francorchamps circuit director Nathalie Maillet has died aged 51, in what has been reported as a double murder-suicide.

William Byron laid down a blisteringly flying lap to win the pole for the inaugural NASCAR Cup Series race on the Indy Road Course.

The final round of the 2021 Formula E season at Berlin has been red-flagged following a major startline crash involving title contenders Mitch Evans and Edoardo Mortara.

Having tasted drivers' and constructors' success in 1962, the BRM Formula 1 team had fallen on hard times by the end of the decade. But the arrival of fresh faces and new cars gave it one more boost as the 1970s began.

The new car that can resurrect Ford's WRC winning pedigree

M-Sport has become the first to unveil its new-for-2022 hybrid World Rally Championship challenger, the Puma Rally1. Ford has upped its support in a bid for glory, but can the new machine roll back the years and return the Blue Oval to the top of the WRC tree?

As Formula 1's push to bring costs down is limiting how much teams can use their state-of-the-art windtunnel facilities, the advancement in simulation technology and its limitless possibilities could soon be the determining factor in a team's success

Why Le Mans' hidden gem will produce its most unpredictable race

OPINION: Much attention in the build-up to the Le Mans 24 Hours is naturally devoted to the battle for outright honours. But the slim field in the Hypercar class as it gets established means the best battle will likely be found in an often-ignored division

Tony Stewart to Chase Briscoe: ‘I’m just glad you stood up for yourself’

Hamlin frustrated after contact with Briscoe: ‘Lack of awareness’

Chase Briscoe on contact with Denny Hamlin: ‘I’d be upset too’